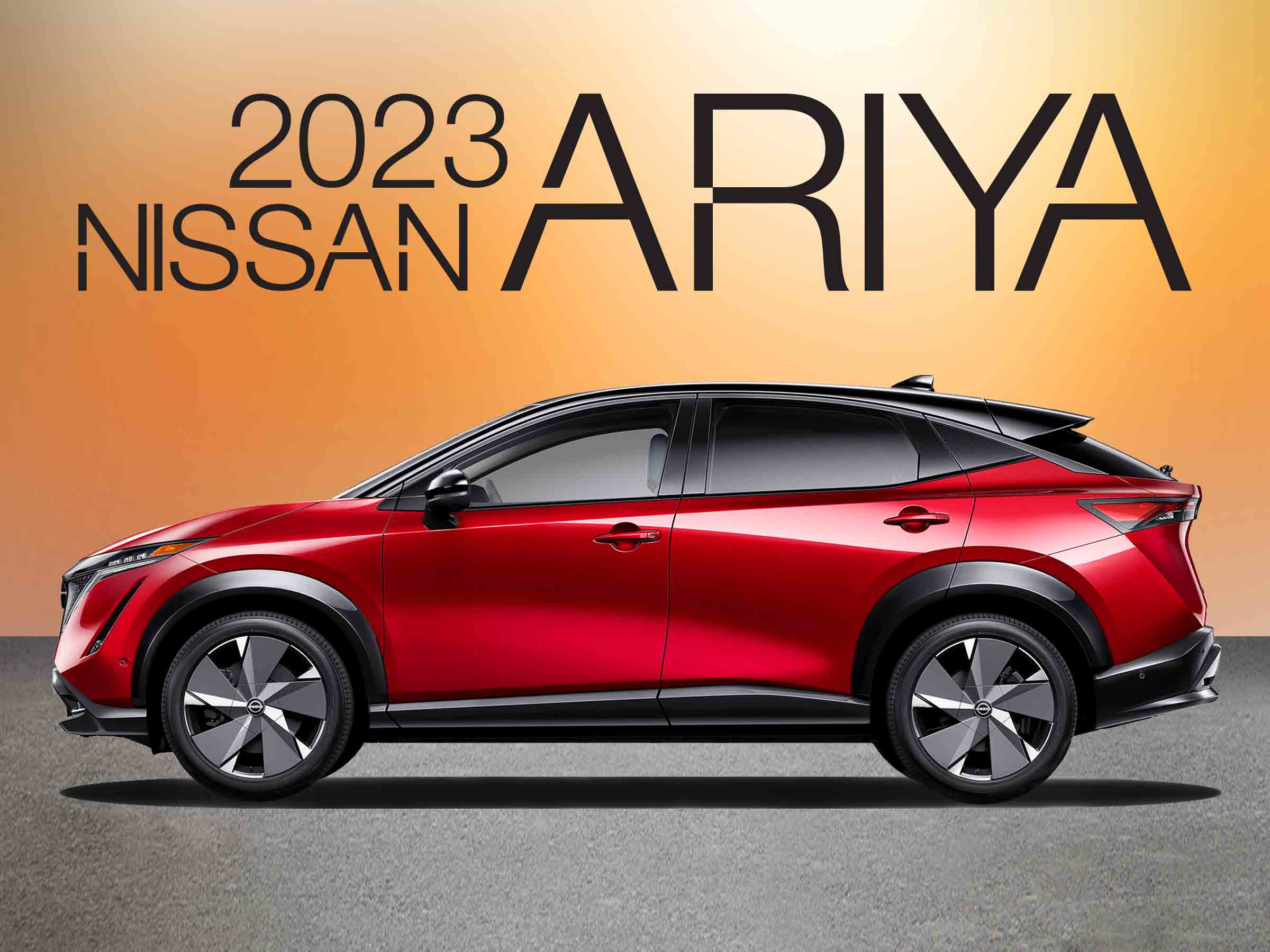 Nissan’s 2023 all-electric crossover Ariya has been created entirely from the ground up. The company calls the EV’s sleek look “Timeless Japanese Futurism,” to represent its committment for an electrified automotive future. The car’s name – ARIYA – derives from an ancient word that has appeared in languages like Sanskrit and Pali. It means noble, dependable and something to be respected. The EV uses a CMF-EV platform that Nissan developed as part of its alliance with Renault and Mitsubishi.

Nissan on Ariya’s design and appearance: “Embracing the Japanese term iki, which characterizes the Ariya's chic, cutting-edge nature, the front of the vehicle appears seamless, elegant and fresh. It's highlighted by a shield – a reimagined grille for the EV era. The shield incorporates a 3-D traditional Japanese kumiko pattern just under the smooth surface, while protecting sensors used for driver assistance functions without the aesthetics interrupting operation. Nissan's redesigned brand logo is prominently placed at the center of the aerodynamic shield, beaming with crisp definition from the 20 LEDs that compose it.”

Ariya is a stylish, highly capable family transport with room for 5 passengers. Says caranddriver.com reviewer Mike Duff, “Ariya's design is certainly distinctive. A 182.9-inch overall length puts it pretty much in the heart of the compact SUV segment, just 0.2 inch shorter than the Toyota RAV4. But it looks bigger in person, thanks to both the height of its front end and the body's cab-forward packaging, which puts the base of the windshield pretty much directly over the front-axle line. Narrow LED headlights and the expansive grille panel give plenty of front-end presence, while the falling roofline has been incorporated without grievous injury to cabin space. It's certainly more interesting to look at than the Leaf.”

Ariya’s sleek, sophisticated, serene cabin offers comfort and easy to use tech. It doesn’t try to overwhelm you with tech and force you to rethink the way you drive. This is the perfect car for 1st time EV adopters who don’t want a difficult learning curve. Ariya is an elegant, affordible way to become an electric vehicle driver.

The EV will be available in front-wheel (Venture+, Evolve+ and Premiere trims) and all-wheel-drive (Platinum+ trim) configurations. Two different battery sizes will be offered: 63kWh and 87kWh. Both packs use 400-v cells and have a sophisticated liquid thermal management system – a major improvement over the air-cooled setup employed in Nissan's other all-electric offering, the LEAF. Nissan claims the system will eliminate or greatly reduce the chance of early battery degradation and capacity loss.

Nissan says its dual-motor, e-4ORCE All-Wheel Drive system on the Platinum+ trim “elevates traction and stability beyond weather. By monitoring energy output and braking response at each wheel, e-4ORCE can produce high-precision control. The kind that can help tame snow-covered roads and wet or icy surfaces.”

Nissan's official 7.2-second 60-mph estimate for Ariya is middle of the pack for a modern EV, though the the AWD Ariya Platinum+ achieves the mark in 4.9 seconds.

Says Nissan: “ARIYA welcomes you with a wide-open design, front and rear outboard Zero Gravity seats, generous 2nd-row legroom and a sliding center console that can reshape your sense of comfort.  A serene ambience fills the cabin from a glowing lantern under the dash.”

Nissan: “Ariya is offered with six two-tone exterior paint combinations, each sporting a black roof, and three striking full-body colors. A unique exterior Copper and Black two-tone color package, called Akatsuki, expresses the moment just before dawn, as the sun marks the beginning of a new day. The striking Ariya interior is defined by the Japanese term ma – referring to its spatiotemporal qualities of belonging to both space and time. The interior is more akin to a sleek café lounge on a starship, evoking performance and intrigue, rather than a traditional automotive cabin.”

Nissan: “The advantages provided by the company's all-new EV platform have enabled the Ariya to offer a spacious cabin. For example, the compact nature of the powertrain components made it possible for Nissan's engineers to install the climate control system under the hood (where a traditional gasoline engine would be), allowing the designers to utilize the whole length of the cabin without traditional obstructions such as a transmission tunnel. The flat, open floor – made possible by the location of the battery at the base of the chassis – and the slim-profile Zero Gravity seats – result in vast amounts of legroom and easy interaction between front- and rear-seat passengers. The EV drivetrain and the generous use of sound-absorbing materials result in a quiet cabin, allowing occupants to relax and enjoy lounge-like space.

Nissan: “Ariya's minimalist instrument panel blends seamlessly with the shape of the cabin and transitions into the doors. It's devoid of buttons and switches found in conventional vehicles. Primary climate control functions are integrated into the wooden center dash in the form of capacitive haptic switches that offer the same feeling as mechanical switches by vibrating when touched.”

Cnet.com’s reviewer Chris Paukert: “This crossover appears modern, distinctive and premium in a way that many of its rivals do not. There's simply more visual interest and complex surfacing on this Nissan than on the bland, corporate Volkswagen ID 4 or the faceless, slipstream-to-a-fault Tesla Model Y, not to mention the Ford Mustang Mach-E, whose designers only somewhat successfully reconciled applying historic muscle-car cues to its utilitarian shape. The truth is, the Ariya looks like it could be the next-generation Murano, a model that's always pushed design boundaries like few other SUVs. However, at 182.9 inches long, the Ariya is actually smaller. It's sized like Nissan's ultra-popular Rogue on the outside, yet its 109.3-inch wheelbase is several inches longer, giving the design a planted, wheels-at-the-corner stance while maximizing interior space.”

Paukert: “The Ariya's driving position is comfortable and outward visibility is good, even from the second row. Material quality appears a notch above Nissan's already much-improved game, and the cabin's ambient lighting hidden behind kumiko-patterned screens has a pleasingly calming effect. So too does the woodgrain-like expanse running along the dashboard, a nice change from fingerprint- and scratch-prone piano-black trim.”

There are four trims to choose from: